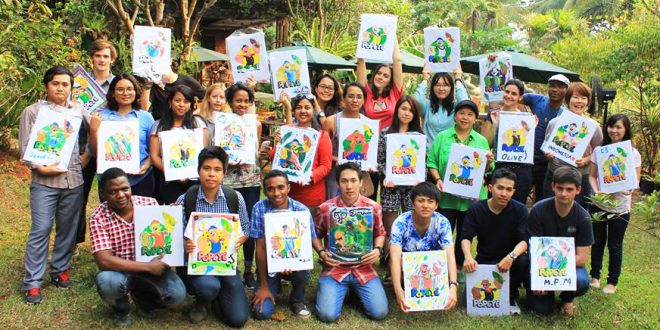 When many universities still dream about becoming world-class universities, Parahyangan Catholic University (UNPAR) has already possessed internationalization characteristics since its establishment in 1955. This was mainly due to the fact that the two main founding fathers of UNPAR were the Bishop of Bandung, Mgr. PM. Arntz, OSC and the Bishop of Bogor, Mgr. Professor Dr. NJC. Geisse, OFM.

International partnership was also nurtured in UNPAR through networks of cooperation and active involvement with overseas universities, such as: International Network of Universities (INU), The Association of Christian Universities and Colleges in Asian(ACUCA), and the Association of Southeast and East Asian Catholic Colleges and Universities (ASEACCU). In addition, the networks of cooperation  were developed based on the initiatives and follow-ups of lecturers’ cooperative groups, such as: Global Entrepreneurship Monitor (GEM) through International collaborations and cooperation with various universities such as TU Dortmund in;  Maastricht School of Management in the Netherlands, Hiroshima University in Japan; Flinders University and Notre Dame University in Australia. The learning processes in UNPAR have increasingly been involving Lecturers-Researchers from renowned overseas Universities, for example, as Visiting Professors and for joint research (research fellows). UNPAR’s lecturers have had more involvement at the international level, for example, Professor Dr. Paulus P Rahardjo, an expert at Geotechnical/ Geo-engineering, who often becomes an invited speaker in international forums. International quality has also been displayed in the form of various publications of lecturers’ scientific works in numerous International Scientific Journals.

In terms of student affairs, UNPAR has students from different backgrounds, such as origin, language and religion, personal beliefs, habits and customs, ethnic groups and even countries. The number of overseas students has also increased. Those students studying  at UNPAR are categorized into the following status:

Currently, Parahyangan Catholic University has two joint master degree programs, namely: (1) Joint Master Degree Program in Water Resources Engineering, in cooperation with Hohai University China and (2) Joint Master Degree Program in Business Administration in cooperation with Jiangsu University China. Through these programs, students can study at UNPAR and the partner university and earn degrees from both.

The aspect that should be highlighted from the various achievements of internationalizing UNPAR, is that all of them are results of synergic cooperation. In addition, the achievements have been obtained through the harmony of objectives between various educational institutions to develop international cooperation based on equality and mutual respect, by way of promoting the value of science, technology, and the humanitarian values that bring about benefits for human life, as stated in article 50 of Law No 12, 2012 concerning higher education. It is in lieu with the UNPAR’s academic life principle which is based on humanities value.

Synergic cooperation has enabled UNPAR to adjust its purpose, process and organizational capacity that support the organizing of international level education as well as producing capable and competitive graduates.